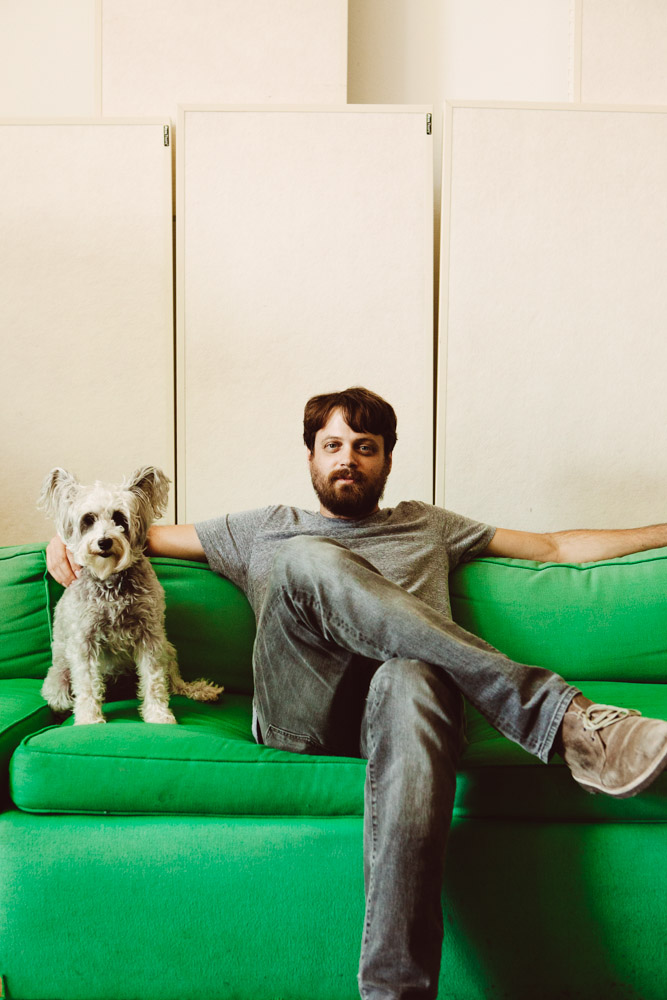 Erik Wofford is a producer/engineer in Austin, Texas. He started his long, twisted career at McCallum High School in Austin, playing in several bands and hanging out at local studios.  While obtaining a geology degree at The University of Texas, he spent most of his time at student radio station KVRX.  Erik was a DJ for four years, ran the Local Live program (in which he engineered over 100 recordings!), and helped coordinate three compilation discs. During this time, he played in minimalist/ambient music project Water Falls with fellow KVRX alum John Barker, performing at several AMODA digital showcases and an art installation using the multi-zoned sound system of an Olympic-sized swimming pool. He also started his own microphone business, Stapes Audio. These two different experiences led Erik to a deeper understanding of  unconventional musical ideas as well a technical knowledge of how to make and customize his own equipment. Later, Erik and John went on to run the label Christmas Mountains, helping out bands such as The Black and For Those Who Know.

After graduating college in 2002, Erik started Cacophony Recorders. He began building his career, starting with Explosions In The Sky’s first record. As time went by, more people discovered the recording haven on the banks of the Colorado River. With its 20 foot ceilings, huge windows overlooking the river valley and wide open space, it's no surprise that some ofAustin's best bands decide to call Cacophony home.

Erik has become a one-stop-shop of everything that is needed to make a band sound good, enlisting the trust of many local bands to develop their sonic statement. Sometimes viewed as the extra invisible member, Erik provides creative production advice, a keen ear for interesting sounds, a forte for mixing and mastering and even occasionally running live sound for a band. In 2006 and 2007, Erik was nominated as producer of the year by Austin Chronicle music critics and won #4 producer of the year in 2006 in the Austin Chronicle Reader's Poll. Cacophony Recorders has made the top twelve studios list in Austin two years running for the Austin American Statesman. In 2011, Erik won a grammy for mastering Grupo Fantasma’s "El Existential." 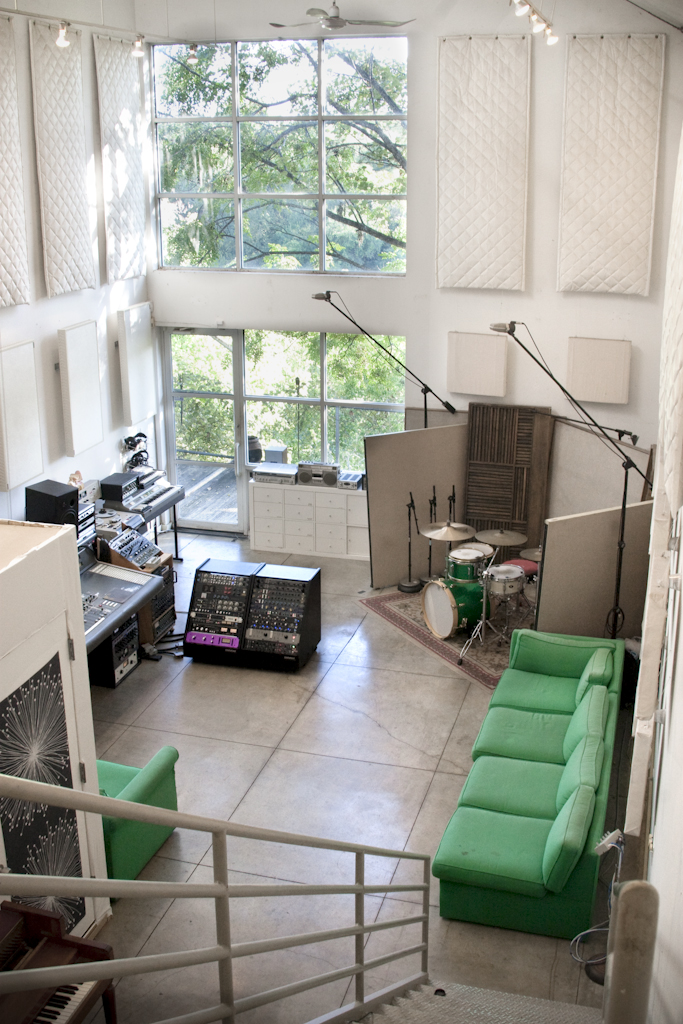 Cacophony Recorders is a unique place among the myriad of studios in Austin. We strike a balance between the comfort of a home studio and the technical capabilities of a professional studio.

The first thing you will notice when you walk into Cacophony is the tall ceiling (essential in huge drum sounds), accented by large windows overlooking the Colorado River valley (essential for personal sanity). You will also notice that there is no separate control room from the recording room, which is a conscious choice on our part. The communication between producer, engineer, and artist is much easier when everyone is in the same room and makes for a much more enjoyable recording experience. Sonic decisions can be made via excellent isolation headphones or a selection of isolation booths.

Over 30 Real Traps bass traps throughout the studio keep frequency response smooth in recording and monitoring. Monitoring is top notch, so you can trust us to have everything transfer as smoothly as possible from the studio to the real world. We make the recording at Cacophony seamless so that you can forget about the technical process and use the studio as a creative environment.

‍Live Room:
Roughly 600 sqft with 18’ to 28’ sloping ceilings. Since this functions primarily as the control room as well as the live room, we’ve given precedence to the room being more accurate for monitoring than having an extremely reverberant character. There’s enough ambiance to add something special but not too much that you can’t tell what you’re doing when listening back.

‍Large Iso Booth:
This booth is 64 sqft, large enough to fit a drum kit if you want a dry 70’s sound. There is a window looking into the main room, so it’s perfect for having a singer or acoustic instrument that needs to play along with drums in the main room.

‍Dry Amp Iso Booth:
This booth has an upright piano, bass amp, and several guitar amps in it.

‍Live Amp Iso Booth:
This booth is set up with a couple extension speaker cabinets and has more of a “sound” to it. You know, being the bathroom and all.

‍Deck:
This is our “lounge," and it’s a very peaceful one. There are speakers set up out there to listen outside of any acoustic environment. This is a lot people’s favorite place to listen in the whole world. And they’re $50 speakers. 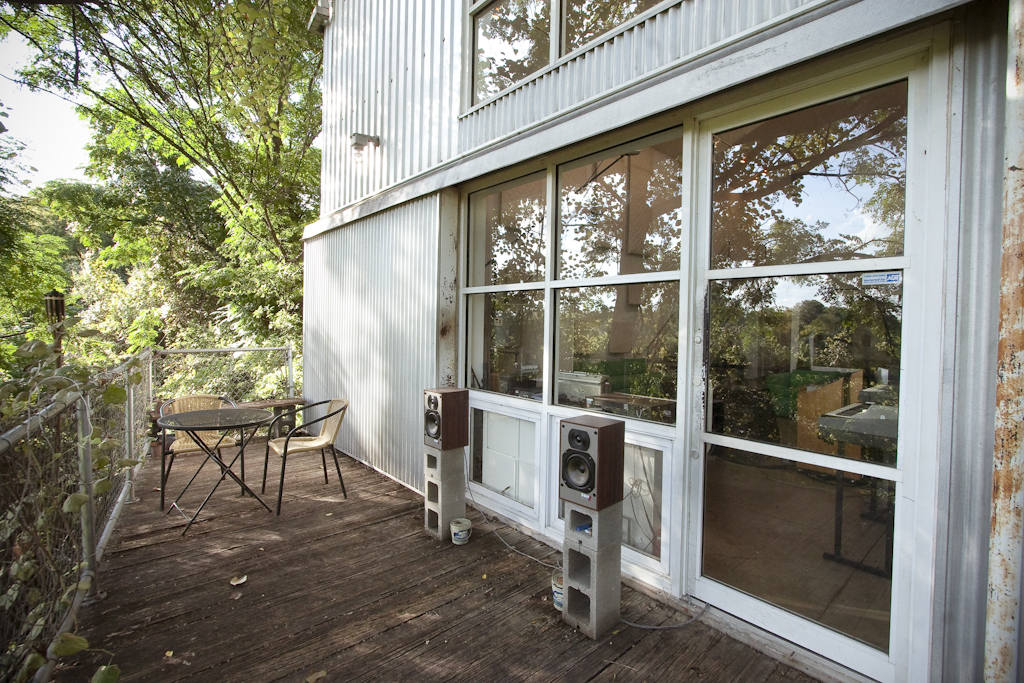 Recording
Bringing your dreams to life. No vision is too grand or minimal.

Mixing
Fine-tuning the details and taking the last creative leap in your project.

Mastering
Peace of mind that your recording will translate to the outside world.